Bootle Chapter No 1473 is one of the smaller chapters in the Ormskirk and Bootle Group, and the visitors along with the members of the chapter gathered at the Litherland Masonic Hall to witness Simon Gray being proclaimed as first principal for a second year. 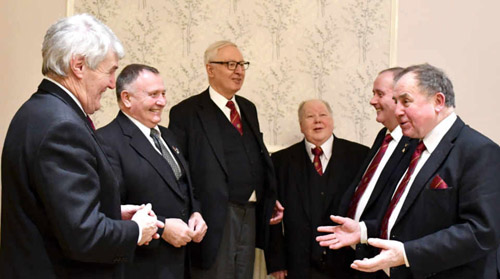 Pictured from left to right are: Paul Renton, Colin Shannon, Simon Gray, Iain Beckett, Tony Hall and Graham Chambers, having a friendly chat before the meeting.

The chapter was honoured by the presence of Paul Renton, the Deputy Grand Superintendent of the Royal Arch Province of West Lancashire. Accompanying Paul was Tony Hall Assistant to the Provincial Grand Principals, the Ormskirk and Bootle Group Chairman Graham Chambers and vice chairman Malcolm Alexander.

Once the initial business of the chapter had been completed, Mark Barton, Provincial Deputy Grand Director of Ceremonies, entered the temple and announced that Paul Renton was without and demanded admission. Paul was then brought into the temple in a procession, accompanied by Tony Hall, Graham Chambers, Malcolm Alexander, acting Provincial grand officers; Barry Fletcher, Anthony Green, Simon Hore and Mike Rimmer.

After Paul was warmly welcomed into the chapter by the three principals. The installation ceremony commenced with Russell Skidmore proclaiming Simon Gray as first principal, Colin Shannon was then installed as second principal by Russell and Iain Beckett being installed as third principal by Mike Clarke.

At the conclusion of the ceremony Paul brought greetings from the Grand Superintendent Tony Harrison, congratulating the three principals and all the companions of the chapter for their enjoyable ceremony.

Simon then presented Paul with three cheques on behalf of the chapter for £100 for the Woodlands Hospice in memory of Michael Meila, who was a member of the chapter and was the third principal. Woodlands Hospice provides hospice care also referred to as ‘specialist palliative care’, aiming to improve the lives of people who have life-limiting illnesses. It helps them to live actively and be as independent as possible. This support often extends to patients’ carers, family and close friends. Meaning, that as well as taking care of patients’ physical needs, their emotional, social and spiritual needs are also looked after.  £100 to the Friends of Tithebarn and £100 to the Litherland Masonic Hall. Paul thanked the companions of the chapter on behalf of the recipients for their generous donations, commenting on the large amount of the donations, from a small chapter with only a small number of members.

The guests of the chapter on the night had the pleasure to witness a very enjoyable and friendly ceremony, before retiring to the festive board to continue the celebration of the three principals being installed.