The local Masons from the Ormskirk and Bootle Group, who meet at Ormskirk Masonic Hall, joined in the local festivities of the Ormskirk Christmas lights switch-on by holding their annual Christmas Fayre in O’Briens Tearooms. 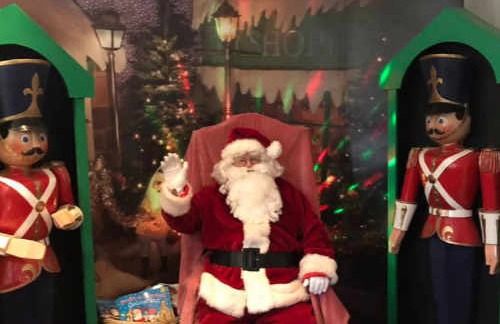 Santa in his Grotto.

The Tearooms were filled with a number of stalls, with some selling handmade Christmas gifts for adults and for children, there was a tombola. Some of the stalls were holding raffles including name a teddy bear, reindeer races, and there was also a Santa Grotto, to name but a few. Refreshments were available throughout the afternoon, being provided by O’Briens Tearooms.

A great deal of thanks is owed to the wives and partners of the Masons from the Ormskirk and Bootle Group who helped support the Christmas Fayre by making the homemade Christmas gifts and in helping to run the stalls.

The Fayre was a great success, helping to raise in excess of £1,000, which will go to a number of good causes. There were over 200 people who attended the Christmas Fayre from the local community, including many children visiting throughout the afternoon, and they were able to meet Father Christmas in his Grotto.

Santa with the wives, partners and family of the Masons who helped run the stalls.