It was a special occasion for the members of Lathom Abbey Lodge No 6286 at their installation meeting, held at the Ormskirk Masonic Hall. The brethren were delighted to give a very warm welcome to their principal guest Peter Levick as the representative of the Provincial Grand Master Tony Harrison. 42 brethren attended the meeting. Also present was the group chairman Graham Chambers and group vice chairman Malcolm Alexander. 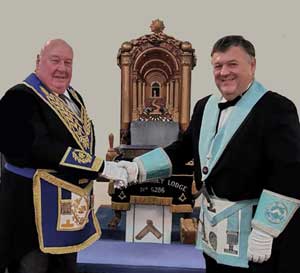 The outgoing and installing WM Phil Stansbie started the evening’s proceedings by warmly welcoming the visiting brethren to the meeting, before opening the lodge and completing the initial lodge business. The director of ceremonies, Nigel Kent, retired and the acting officers were asked to remain in their positions. When the DC returned he announced that Peter Levick was seeking admission. He was admitted along with the other grand and Provincial grand officers. The WM welcomed Peter and the other grand officers to the lodge.

The master elect John Mercer was presented to the brethren by Stewart Cranage, John’s brother-in-law. John submitted to the ancient charges and regulations, he then advanced and recited his obligation as master elect. The outgoing WM thanked the brethren for all their support and hard work they had given him during his year in office.

Phil then proceeded to install John, according to ancient custom into the chair of King Solomon. The working tools for the third degree were presented by John Plummer, the second degree tools by Bill Dutch and the first degree tools by the new master’s own son Andrew Mercer, a Lewis aged just 18. All were delivered in an excellent and faultless manner.

At the end the ceremony of installation, Peter stood and gave the Provincial Grand Masters congratulations to John on attaining the chair of the lodge once again, saying that he hoped he would have a busy and happy year in the chair. He also congratulated Phil for the excellent manner in which he had performed the installation. Peter then congratulated all the brethren who had been involved in their respective roles during the ceremony especially the brethren for their excellent delivery of the working tools.

Afterwards all retired for a wonderful meal of leek and potato soup, sugar baked ham served with roast potatoes and trio of ice cream. During the meal a raffle was held which raised £225 and will be donated to Masonic charities at a later date.