54 members and guests attended the Stanley of Bickerstaffe Lodge No 3511 installation at Ormskirk Masonic Hall. The principal guest was Christopher Hamilton and he was joined by Frank Umbers, Assistant Provincial Grand Master, who is a member of the lodge and three other grand officers. Also, in attendance was Graham Chambers the group chairman together with the Malcolm Alexander the group vice chairman, Trevor Martin the group secretary and Stewart Cranage the Provincial Grand Mentor. In addition to the lodges own members, there were four masters of other lodges and numerous members of other lodges in attendance. 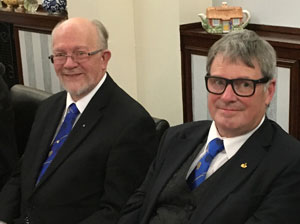 Christopher Hamilton (left) with Kevin Chicken at the festive board.

Andrew Clarke installed his successor Kevin Chicken in a most sincere and fluent manner which was enjoyed by all present. The working tools were well presented by James Roberts (third degree) Malcolm Sandywell (second degree) and Ray Tompsett (first degree). At the end of the ceremony Christopher gave greetings from the Provincial Grand Master Tony Harrison, he also expressed his thanks to Malcolm Sandywell, the lodge DC, for all the excellent work he had done both prior to and during the ceremony.

The immediate past master Andrew Clarke presented Christopher Hamilton with five cheques totalling £2,203 which included – £1,503 to the MCF 2021 Festival, £200 to the Ormskirk Masonic Hall Association, £250 each to the Friends of Tithebarn and Macmillan Cancer Support.

A further £300 had been forwarded to the MCF 2021 Festival on behalf of the Ormskirk and Bootle Group. This further amount had been raised in support of the same event by Malcolm, Don Carton of Mersey Lodge No 5199 and a donation from Crosby Lodge No 3714. Don Carton had joined Malcolm on the ‘Ride the Lights’ event dressed as Father Christmas which went down particularly well with the spectators at this very special fund raising event.  The charity plate raised £60 with a further £104 in white envelopes. The raffle raised a further £260 making the total raised of £424. 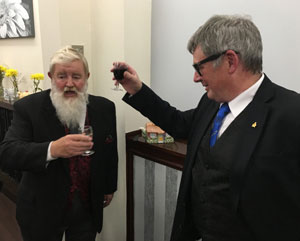 The master’s song being sung by John Mawdesley (left) to Kevin Chicken.

The brethren retired to the festive board to partake in a culinary delight of egg O’Brien, steamed steak and kidney suet pudding and honeycomb cheesecake served with caramel ice cream. All enjoyed, what has become the norm, a very fine meal prepared by the chef Gary O’Brien.

Following the meal, Christopher gave his own greetings to Kevin and those of the other grand officers present. Christopher continued by expressing his personal concerns of the future of Freemasonry and made comparisons to his own early years in Masonry.

Andrew Clarke congratulated the new master Kevin Chicken at the festive board regaling the brethren with details of Kevin’s exploits in the Merchant Navy. His career then moved to a shore job as an engineering surveyor and more recently as a health and safety consultant. Kevin was Initiated into Tarleton Lodge No 7871 in 1982 and joined Stanley of Bickerstaffe Lodge in 2016. Kevin is also a member of the Royal Arch and several other Masonic Orders. In addition, he is the Ormskirk Masonic Hall Association Treasurer and editor of the Ormskirk and Bootle Group Year Book. All in all, a very busy man and a Mason. The master’s song was sung by John Mawdesley who was accompanied at the piano by Roger Watkinson. 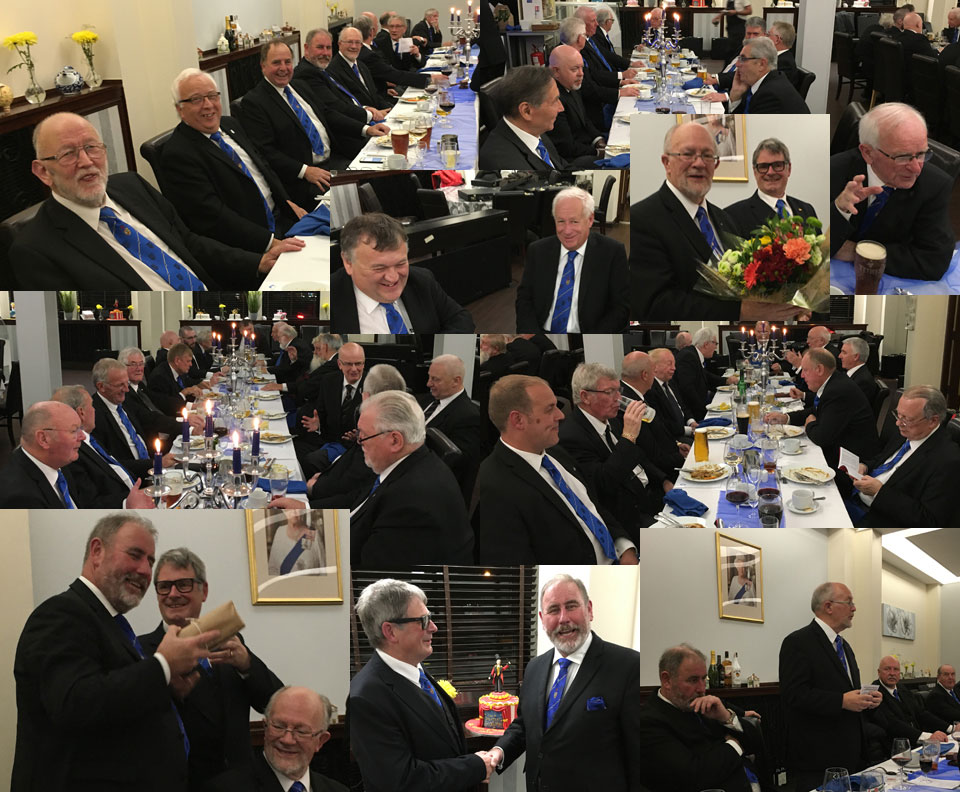