It was a special occasion for the members of Aughton Lodge No 7996 at their installation meeting, held at the Ormskirk Masonic Hall. The brethren were delighted to give a very warm welcome to their principal guest David Anderton as the representative of the Provincial Grand Master Tony Harrison. Joining David were grand officers, Peter Taylor, Malcolm Alexander, Colin Jenkins, Andy Barton and Andrew Whittle. 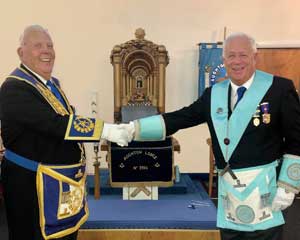 The outgoing and installing WM John Wootton started the evening’s proceedings by warmly welcoming the visiting brethren to the meeting, before opening the lodge and completing the initial lodge business. The acting director of ceremonies, Derek Westby retired and the acting officers were asked to remain in their positions. When the DC returned he announced that David Anderton was seeking admission. He was admitted along with the other grand and Provincial grand officers. The WM welcomed David and the other grand officers to the lodge.

The master elect Stewart Cranage was presented to the brethren by Derek Westby. Stewart submitted to the ancient charges and regulations, he then advanced and recited his obligation as master elect. The outgoing WM thanked the brethren for all their support and hard work they had given him during his year in office.

John then proceeded to install Stewart, according to ancient custom into the chair of King Solomon. The working tools for the third degree were presented by Jim Carrie, the second degree tools by Dan Davies and the first degree tools by Charlie Browne all delivered in an excellent and faultless manner.

At the end the ceremony of installation, David stood and gave the Provincial Grand Masters congratulations to Stewart on attaining the chair of the lodge once again, saying that he hoped Stewart would have a busy and happy year in the chair. He also congratulated John for the excellent manner in which he had installed Stewart into the chair. David then congratulated all the brethren who had been involved in their respective roles during the ceremony especially Dan Davies for his excellent delivery of the second degree tools.

The ceremony completed, Stewart presented David with the following donations: £750 for the West Lancashire MCF 2021 Festival, £500 to The Back Up Trust – Transforming lives after spinal cord injuries, £500 to Northwest Blood Bikes, £500 to Rainbow House, £250 to Tithebarn, £250 to Zoё’s Place and £250 to HOME. David thanked the brethren of the lodge for their very generous and worthy donations totalling £3,000, before having the privilege to present the lodge with their Patron’s certificate for the 2021 Festival.

After closing the lodge in peace and harmony the brethren made their way to an excellent festive board which was enjoyed by all. During this, a raffle was held which raised £315.50 which will be donated to charities at a later date.

In response to the toast to his health David thanked, and again congratulated Stewart for becoming WM once more, the brethren who had been involved in organising the night and the brethren who performed in the ceremony.